I decided to do a separate post for my LO, because of the computer problems. Still not getting the right colors of the page as they are in real life, but I guess I have to learn more about photography to fix that problem.

I will admit that Kelly Goree's layout was an inspiration for my page. I changed a few things on my page, but  I did start it as a scraplift of her work. I don't think I've ever seen a page that Kelly did and I didn't like. Her original page can be found HERE: 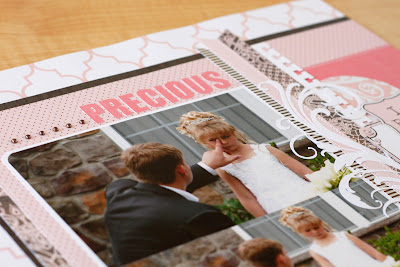 I've had these pictures for a looong time and grabbed them out of the box many, many times to scrapbook, but never did because I was afraid I'll do something wrong. There was a PRT episode on Scrapbook Procrastination and I realized that's what I did. Sometimes we procrastinate because we are afraid to do a mistake. That was me. While other less favorite pictures were living organized and decorated in the album, these were still in the box. This week I just grabbed them and decided to make a page, and if it doesn't turn out the way I wanted I can always reprint pictures and do another page.

Here is what I got: 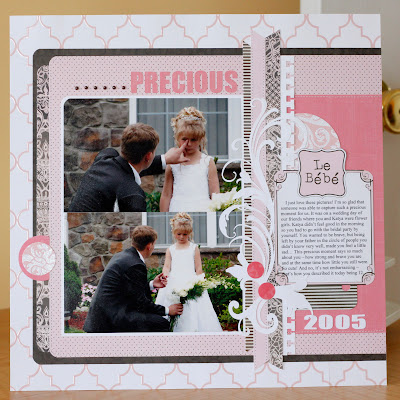 I just love when my title has a perfect match with my papers! And that's when Silhouette comes in handy. Love this "Impact" font too. Letters are easy to work with after they are being cut out. 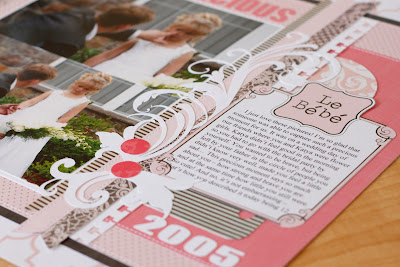 This gorgeous flourish by Basic Grey was also cut with Silhouette. I originally wanted to use it on my Wedding LO, but realized I didn't by a design just for one use, so you'll probably see it again sometimes.

Just received four weeks worth of pictures for PL yesterday! Got to go put them in the album. Thank you for stopping by and I'll see you later.